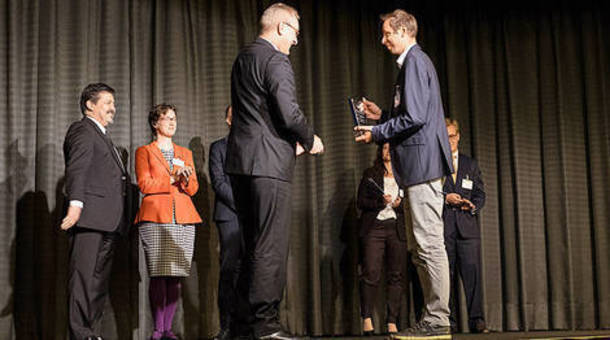 Explaining their choice of winner for the German Award for Excellence 2015, the certification company DQS highlighted the outstanding proactive engagement of the Bundesliga football club VfL Wolfsburg. Wolfsburg’s efforts had focused on important issues such as education, health and integration, and its success, said the jury, is confirmed by thriving projects like the Muuvit programme, of which VfL’s sporting director, Klaus Allofs, is the patron.

DQS presented the awards in recognition of corporate sustainability work. This year’s winners included Muuvit’s partner, VfL Wolfsburg, who scooped the award for Society Engagement National. Accepting the award on behalf of the CSR department was Nico Briskorn, head of department and responsible for VfL’s “gemeinsam bewegen” (“move together”) initiative.

The Bundesliga football club has been supporting the Muuvit programme since 2009, focusing on interconnected long-term projects it has developed by itself. Muuvit has already encouraged 35,000 children in Lower Saxony and Saxony Anhalt to enjoy learning by moving.

To find out more, visit: www.vfl-wolfsburg.de