Marko Kantomaa is an internationally acknowledged researcher at the Finnish Research Center for Sport and Health Sciences and at Imperial College of London. His research focus is the relationship of physical activity on cognitive and social development of children as well as on their academic performance. 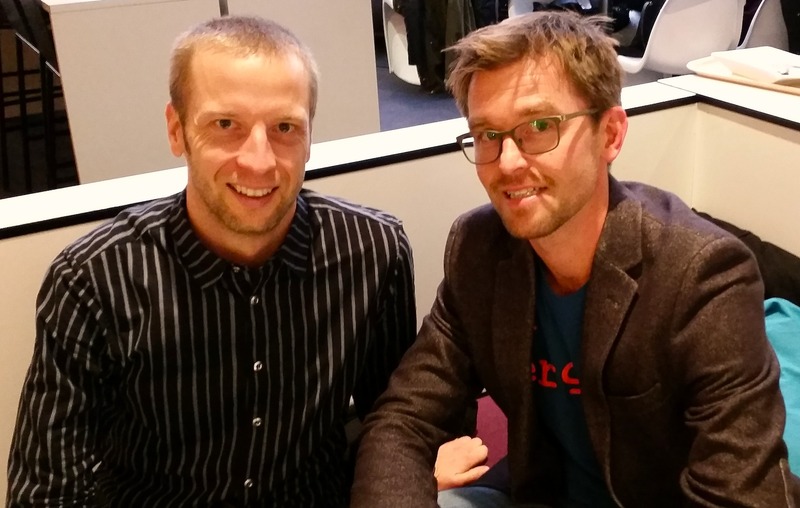 Juha Villanen of Muuvit met Marko Kantomaa (on the left in the picture) in Helsinki and asked a few questions right away.

Marko: “Sure! I try to get as much varied exercise as I can each day. I have a background in orienteering, so I like to exercise out in the fresh air whenever I can.”

Juha: “How did you end up in this field of research?”

Marko: “I noticed a connection between sports and learning back in the days when I was a teacher. The more active kids with finer motor skills were often the faster learners in other subjects as well.”

Juha: “Why is physical activity so important?”

Marko: “From a learning point of view physical activity is important because it has a positive impact on the structures and functions of the brain; it’s an opportunity for social interaction and develops people’s social skills. It also has a positive impact on mental functions – memory, precision and function control, for example, as well as on people’s self-confidence and a pleasant school atmosphere. All these factors and influences are conducive to learning.”

Juha: “Is physical exercise already recognised as part of the learning process or an aid to learning?”

Marko: “Over the last few years we’ve come to learn more and more about the link between physical activity and successful learning. But as yet, we’re still not making enough use of the full potential of exercise to support learning in the classroom.”

Juha: “Are there any regional differences in the way physical activity is recognised as a contributor to learning? You’re going to give lectures in Germany and you are also working in Finland and the UK.”

Marko: “As I see it, there can indeed be regional differences in the way exercising is viewed, especially from a learning perspective, between different countries, for example. But factors relating to local conditions can also have an effect – like exercising on the way to school or children getting active of their own free will. Structural factors also have an impact. In Finland, for instance, schools and teachers can largely make their own decisions about their lessons and use physical activity as an aid to learning.”

Juha: “In terms of your research, what would be the winning lottery ticket for you? What would you like to prove?”

Marko: “In terms of my research, sufficient financing would be the winning ticket! J I would like to know more about the mechanisms by which physical activity impacts on learning and learning success.”

Juha: “What would be your message – to school authorities, decision-makers, teachers and parents?”

Marko: To schools and decision-makers I’d like to say: Integrate more exercise into everyday classes early on and use it as an aid to learning. Increase the activities available to kids in free periods and do more to make sure they exercise on the way to school. To parents I would say: Give your kids the opportunity to play games that involve physical activity. Encourage them to exercise in other ways and get active with them yourselves!”

Muuvit Congress with Marko Kantomaa in Berlin: "Impact of physical activity on learning and integration?"